Also known as Ozone Blasting, Ozone Shock Treatment is a commonly used method of removing odor and killing microorganisms and vermin in commercial and residential buildings. It most widely preferred because it is less costly as compared to other methods of sterilizing indoor spaces. Ozone shock treatment Calgary encompasses the use of an ozone generator to create lethal levels of ozone (a natural element formed in the atmosphere) in an enclosed mold affected or odor ridden space for a short period of time, mostly between one to four hours.

Ozone is an ideal element because of its strong oxidation power and the fact that it is a very good disinfectant and kills bacteria and other odor-causing materials like mold, mold spores mildew, and fungi. It is, however, recommended that when conducting this treatment, you should evacuate the area of people, live plants, and animals during the time that the area will be exposed to the ozone gas, as well as a decent amount of time afterward to allow the ozone to dissipate.

Oxy-Genie Carpet Cleaning Services offers Ozone Shock Treatment services, and here are a few scenarios in which it can be an effective method.

One When moving to a new house or a new place of work, and the previous occupant was a smoker, more often than not, there will still be traces of that cigarette smoke. It is very discomforting because the smell of smoke can be very irritating if you are not an active smoker.

For proper cigarette smoke odour removal, ozone shock treatment might be the best method. The process we use at Oxy-Genie is foolproof. The ozone gas will follow the same path as the cigarette smoke and remove any smoke smell from soft materials such as upholstery, carpets, and clothing. The length of the treatment is dependent on the severity of the smell, and our technicians will advise you accordingly based on their past experiences with professional ozone treatment .

Cooking odours tend to cling on to surfaces in your kitchen. The common cause of these odours includes spices, burnt food, and oils. Your standard cleaning routine might not be enough to clear the odor because microscopic particles penetrate various surfaces and attach themselves in -hard-to-reach areas. That is why Ozone Shock Treatment might be the best solution. The ozone gas penetrates these hard-to-reach areas clearing the coking odour. It’s as easy as that, ozone home treatment works!

The moist environment inside most marine vessels such as boats, yachts and cruise liners and other recreational vehicles such as RVs encourages the growth of mold and other microorganisms. In addition to that, the activities that take place inside these vessels, such as cooking, may result in spillage, which ends up in hard-to-reach areas. This also contributes to the growth of microorganisms. The odor emitted can easily be eliminated through Ozone Blasting. All you have to do is enclose the area and then place an ozone generator. Set the time, depending on the severity of the recreational vehicle’s smell, and wait for the magic to happen.

Sometimes we rent our cars to friends, and they come back with a peculiar odor. This could be a result of body odors, pets, spillage of food and beverages, and maybe even cigarettes. A trip to the car wash might get the cleaning part done, but the vehicle odor will still be there. Ozone Shock Treatment might just be your only way to get rid of the smell. The ozone gas will travel through the same path that the odor followed, which guarantees that it will be eliminated one hundred percent.

As much as our pets are adorable and we love them, they can sometimes be very messy. They spill food everywhere, and their urine can have a disturbing smell. Even if you always clean up after them and ensure they are washed regularly, they still have that natural odor that sticks on carpets, sofas, bed, and any upholstery within the house. You might not even notice the smell because you are so used to it, but anyone from outside will. If you are looking to eliminate this smell, your regular cleaning routine won’t help. What you need is Ozone Shock Treatment, and the best people to help you with that is the team at Oxy-Genie Carpet Cleaning Services. Our methods for pet odour removal in Calgary have been tried and tested, and you are sure of results.

At Oxy-Genie Carpet Cleaning Services, we have the latest state of the art equipment and a dedicated team of professionals to help you get rid of any troubling smells you might be having at work or in the house. Call us today for any inquiries.

Answers to the most common Calgary OZONE SHOCK TREATMENTS FAQS:

Below are some of the several questions we are asked concerning ozone shock treatments, ozone shock treatment Calgary cost, ozone generator, house smoke, and cigarette smoke removal. Oxygenie Calgary cleaning services have notable faqs on this web-page to help you out. If your question is not listed below, feel free to contact us.

Why should I trust your company when it comes to ozone shock treatments?

You should trust our company to provide you with effective ozone shock treatments as we are professional, consistent, and thorough with each of the services that we provide to our customers.

What type of services does your company offer?

How much experience does your company have when it comes to ozone shock treatments?

If you are interested in our ozone shock treatments, you can contact us at Oxy-Genie Carpet Cleaning Services by calling our phone number at (403) 452-4644 or by visiting our website and filling out a form on our Contact Us page to make an appointment.

Which areas does your company provide their ozone shock treatments to?

Who do you help when it comes to ozone shock treatments?

With our ozone shock treatments, we help everyone and every property as we provide this service to both residential properties and commercial buildings.

Can I be in my home while you do an ozone shock treatment?

How long does it take for you to do ozone shock treatments?

It depends on many factors, the amount of ozone generated and the size of the area to be treated. And how quickly the air circulates. The device output is a vital factor. Ozone shock treatment can effectively decontaminate a room from 4 hours to several hours. Ozone generators are excellent for removing odours, chemical fumes, bacteria, and other contaminants from the air. Still, for it to be effective, the air needs to be circulated through the room or area for the ozone to do its job.
At Oxy-Genie Carpet Cleaning Services, our ozone shock treatments take about one to four hours to complete inside your home or property, depending on the size of the space.

What type of benefits does your ozone shock treatments provide?

Do you guys help remove cigarette smoke odor from homes?

Yes, at Oxy-Genie Carpet Cleaning Services, we can help remove the cigarette smoke odor from your home through doing ozone shock treatments.

What are some of the ozone services that you provide?

Some of the services that we provide for ozone shock treatments include removing fire and smoke damage, eradicating cooking odors, removing cigarette and tobacco smell, removing food odors, eliminating urine odor, removing pet smell, and as destroy mildew and mold.

How Long Does It Take for Ozone to Dissipate After Treatments?

Ozone will last from half an hour to four hours until the third oxygen atom breaks away and reverts to oxygen at a higher dosage. At lower doses, ozone takes 30 minutes to 1-2 hours to degrade into breathing oxygen. To be safe, leave the room for at least three hours after turning off an ozone generator. The amount of ozone in the air is affected by room size, temperature, dust, and pollutants.

Please remember that each situation is unique, as are the time and cost of ozone treatments. Contact the service provider that serves your area.

One of the most challenging issues that most Calgary, Alberta, houses face is odour elimination. Odours may linger long after removing the source because they have entered carpet underlay, wall coverings, heating and cooling ducts, and window treatments. Ozone home cleaning is the most effective way to raid.

At Oxy-Genie Carpet Cleaning Services, we offer cutting-edge technology and a devoted team of specialists to assist you in getting rid of any lingering cigar odours at work or at home. Please get in touch with Oxy professional ozone treatment right away if you have any questions. 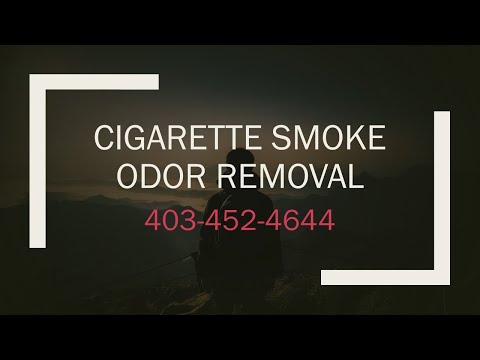 The ozone shock treatment that was performed at my rental property was performed in a very professional manner, which left a positive impression on me. From the time of the appointment until I started the task, I was kept informed of any delays or possible problems that we ran into. Ken performed an excellent job, and as a result, I will continue to make use of their services in the years to come.

“Ken came on time, and we discussed the procedures he would take to remove the cigarette smell from my house. Scheduling with Ken was simple and quick, even though we had to reschedule the initial session due to a change in my schedule. We received Calgary’s finest ozone shock treatment; we were absolutely happy, and we would surely utilise them again the next time. Thank you very much!”